Here we are onto a classic from around seven years ago,”Toss the Turtle!” A launcher,flash game – You can guess that by the fact that you have to launch the game in order to get some lunch,a feature witch can be also explained simply with the words “Press buttons,wait for results.”

The magic of this game usually lasts for about 5 to 10 rounds,after which,depending on your goals,you either close it or it becomes a long journey to the west.The satisfaction of saving enough money to buy and aquire a new upgrade does not last for long either.The key elements in these types of games are usually the interactive obstacles that let you keep going or stop completely.And I’ll be honest,the ones in this game are not really all that fun and interesting after you get them two or three times.Then again,this game was one of the first of its kind,so comparing it to other titles from the same genre that came way after would be pretty harsh and unnecessary.

IT LACKS ENDING SEQUENCE!This is a plus,a much desired flavor indeed!

Then you realize that the biggest challenge this game has to offer is the one where you have to play it for five hours,but you are too smart for that annoying bit,so you leave the game open at the shop and instead,you decide to spend those hours on making the biggest eggplant pie ever!

…but you still have to hit /number of certain enemy type,so thats still another hour or so of literal “Press and wait.”

Yeah,distance traveled does not bring satisfaction,unless it’s a part of an achievement.Achievements and interactive obstacles – Those are the fish and the butter of these games.

I find it a bit weird that I used to own a PC that would not be able to run this game,back in the days.The only way for me to play it was through the way-more-superior-than-mine PC that one of my friends had and would lend me to use every now and then.Man,that was such a long time ago…There was such a hype for Half-Life 2 back then and indie game development was blooming,which in one way or another led to the creation of this game.Codename:Gordon!A Half-Life 2 as a 2-D PLATFORMER?Now that,that managed to grab me right away.For its time,that was a pretty impressive idea!Nowadays however,It wouldn’t have impressed me in the slightest though…

Codename:Gorden offers to the player a full pack’o platforming action,along with elements of puzzles,original plot,classic Half-Life 2 characters,enemies and weapons/items,various difficulties for all ages and minds AND an unlockable bonus game.Now,I used to play this game all the time,always on the easiest difficulty,but for the LR19,I went through a whole new playthrough on the highest difficulty.

Gameplay in a nutshell – Direct approach towards the enemies would usually means death or a huge loss of HP/Battery.[GROUNDBREAKING DISCOVERY!]That being said,the enemies have a pretty basic patterns and tend to not respond if they are attacked from certain angles.Moving controls are alright,while jumping will make you praise God almighy each time you manage to successfully go over a pitfall or another obstacle.Grenades obliterate everything!They are the perfect tool for dealing with enemies fast and easy,thus letting you keep your physical and mental state intact.[?]/  There are five[six] weapons in the game – The crowbar,the pistol,the MP5 and the gravity gun.The crowbar is more or less your “Headcrab removal”,if any of them manage to jump on your head.The pistol is as good until you get the MP5.The gravity gun is pretty much a “Puzzle time” tool.By that I mean you’ll get to pretty much use it to solve puzzles to pass by areas or to dispatch enemies that would otherwise drain your stats by a lot.

There are also two bosses in the game,wherein the first one is pretty much a game filler.Regardless of the difficulty level or how you dodge its attacks,you are bound to win,simply because you just have a higher amount of HP.I’m not sure how the second boss fares on easier difficulties,but I don’t remember having any actual problems with it back in the days.On the highest difficulty however,I simply tanked its attacks,while tossing all the possible grenades I can carry at it,potentially finishing the work with the MP5.It’s kinda dumb how you can abuse the spawning powerups in the arena where the boss is.By not moving too further within’ the arena,the boss would not spawn,thus you can stock on all the ammo and powerups until you are full.OH MAN,CHEESING A GAME!I mean,come on!Actual dodging requires way too much work for how much I get paid and I don’t get paid at all!/////////////////

I guess my conclusion on this would be that the game is pretty alright.It has its ups and downs,mostly downs,but hey!2004 was quite a long time ago…oh well.

I like the art.The music was alright.Not a big fan of the level design.It’s not bad but…egh…yeah…Plot was just there.It’s kinda amusing to a certain degree…I don’t know. 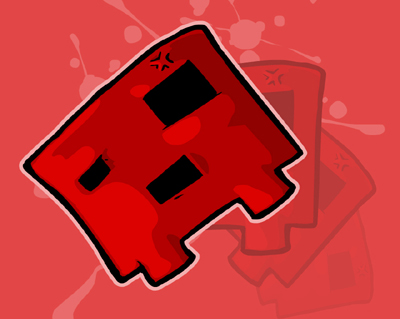 Honestly,this was the first game back in the days,where I faced the concept of fast-paced,precise platforming for the first time in my life.I don’t know if the “Jumper” series were the ones who inspired games of similar kind later on,but to me it seems that is so.I really don’t remember playing anything like it in my old days,but then again,it’s not like I owned a lot of games back then…

I pretty much sumed it all up.It’s a fast-paced platformer where precision is a thing.Dying is rewarded with a quick reset.giving you the opportunity to jump again at the level and ram your head in another obstacle so you can die again!Never heard of that before!But really,for how old and scrappy this game is,it’s still pretty fun and enjoyable.It has quite a lot of levels,various gimmicks,the difficulty is quite challenging and on top of that you get to face the crappiest final boss ever!You are bound to be satisfied with this exciting platformer,where you can constantly yell at the main character Ogmo for having a weird hit box.

…and that’s the first Jumper in a nutshell.Let’s give it a JUMPING score of 6.8 out of 10!

But this is an ENGINE,not a real game!Despite that,I have my reasons for making a post about this and making it an actual entry for the vault.One being that I need a reason to start the new “Junk box” thing that I promised billion years ago.The other being is that I really like this engine as a whole and I think it deserves a place in my list.The last being is that I need an entry to finish the first volume!OH MAN 50 GAMES COMPLETED! [This should not be mentioned here butohwell.;]

To clarify,putting this in the category of being completed for me means that I’ve completed all the default worlds that come with the engine itself:

While these worlds did not strike me as being amazing,they were pretty fun and simple.I can say that they are a good starting point for someone who wants to get a feel for how the ingame mechanics work.

Super Murrio Bros. X – The engine that is killing the ol’ SMBW hacking and what could have possibly inspired the existance of SUPER MARIO MAKER as a whole.A silly theory perhaps,but I can’t shake the weird feeling that there is a bit of truth in it.That is if I measure “bit” as the mass of a giant meteorite!But who am I to say anything about it?Me?A person who still can’t finish “ALBION?” LAUGHABLE!

This engine combines all the platformy MARIOS the games and HMMMM SOUNDS FAMILIAR!Alright,enough picking on SMM… In all seriousness,this engine is pretty great!As I mentioned,it’s a mixture of all[?] the platforming Mario games,along with the addition of using various characters with different abilities.YOU CAN ALSO PLAY WITH THE ELF FROM LEGEND OF LOLO!It’s pretty amazing.There are also really cool powerups like the Ice Flower and the Tanooki suit and yeah.This engine has a lot to offer.There is also a co-op mode,editor where you can start making levels right away,you can edit your own graphics and…and…THERE IS A LOT YOU CAN DO,HOLY BANANA!

Making levels is pretty easy,wherein the advanced settings might require a person to spend a few hours to get in touch with them.Overall,there are no any actual limits as to what a person would like to create.given also the fact that there are other additional tools that can be used to further alter the engine.

But you know…YOU KNOW!Nothing in this world is perfect.This engine has a bad points as well.My personal being the delicate hitbox of the lava and the homing,flying koopas.The second one is just being me expressing my inability to handle various situations in this engine.There are also lots of presented bugs and whatnot,but you know…

…overall,for what it is,Super Mario Bros. X is pretty impressive tool.People are really creative with it and…well,people tend to be creative with everything in general.But it’s something that really makes me happy.You know,seeing something well made and saying with my inside voice…

…I hope we don’t get nuked soon…