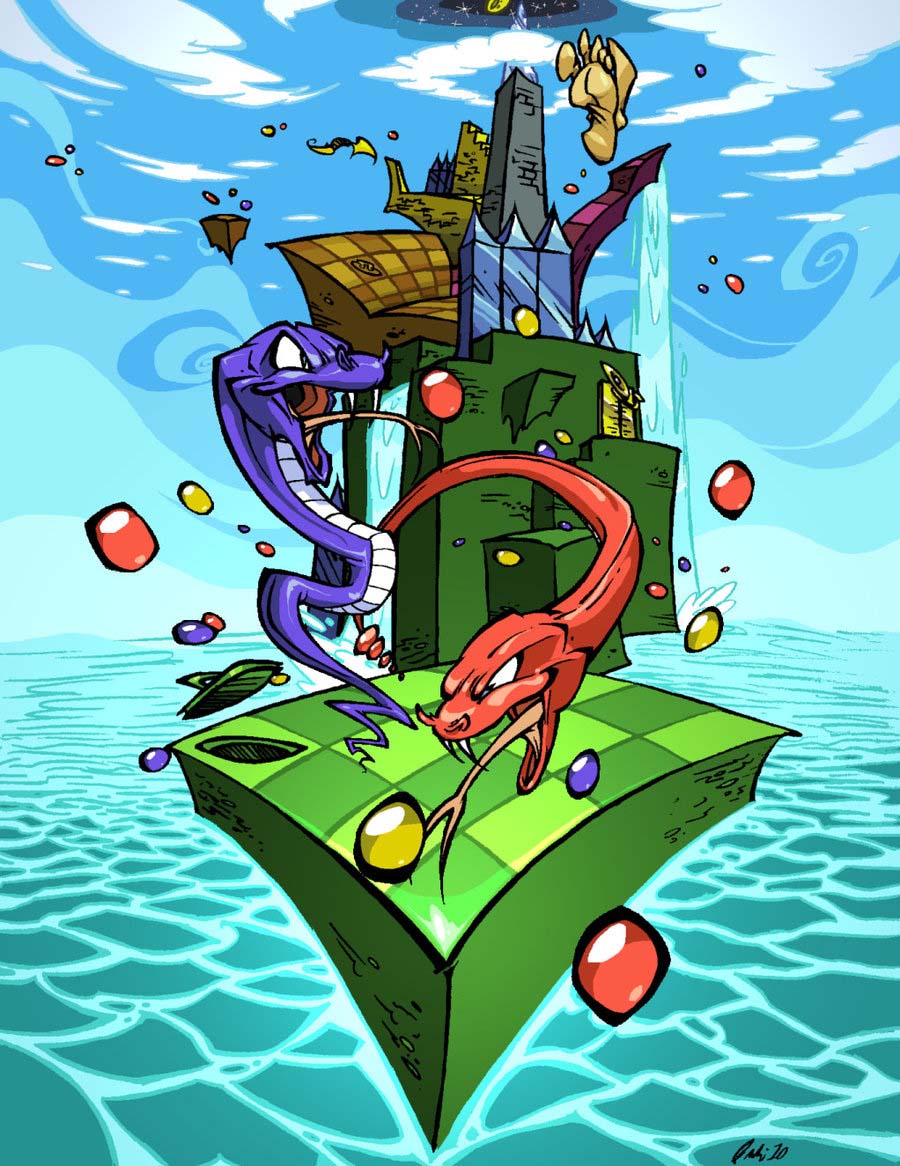 Was it on my eight or my ninth birthday, I cannot remember. My family took me to a certain big city, that’s just two hours travel time by car, from my hometown. We went to some fancy place where I saw technology, new and amazing. At one corner, we stopped, where lots of famiclone games were on a display. They even played demos on many big screens at the back. I saw “Aladdin” by Hummer Team and I really wanted to get that cartridge. However, my mother and brother were more interested in another game, to which I payed little attention at the time. There was a demo of “Snake Rattle ‘n’ Roll”, which seemed really amazing at the time, what with its isometric perspective. Given that we never saw any game like it before, looks like that were easy to fool one into thinking that it’s something advanced way beyond! We bought the cartridge, boy, was it expensive! Calculated in dollars, it was around five or so. As far as cartridge pricing went, we always thought that anything five and above was too expensive for a video game. I was really sad about not getting the “Aladdin” cartridge, but at the same time, I was really curious and looking forward to playing the new, unknown game. It brought joy to our whole family, especially the first level, as I was still trying to figure out the controls and whatnot. As the days went by, me and my brother managed to advance bit by bit, level by level. We uncovered the secret of the swimming gear, but alas, our journey was bound to end on the geysers level. Not because we couldn’t handle the difficulty of it, but because the game was broken. There was an error in the code that the pirates made when they were making the cartridge. It made the geysers show up once and then every object [the geysers and also the enemies] in the level disappeared, making it unplayable. This was a pretty unique moment in my life, as it was the first time where I was introduced to the concept of a game being broken in a certain way. We even tried to find ways to get pass the error that occur, but nothing managed to work out. What’s even more sad is that we never knew about ALL the existing warps in the game, some of which could have let us skip the level that breaks the game. I lend the cartridge to a girl from my class a few years after and she never gave it back. FREAKIN’ GIRLS!!!

Time passes. I grow up. Memories shatter and new ones are created. I become the founder of Laboratory Room 19. I am now the best video game player person in the universe. I stumble upon “Snake Rattle ‘n’ Roll” once again and my burning passion to avenge my childhood “Me” and make him happy explodes like a nuclear warhead.

After all these years, I sure had trouble getting used to the controls once again. Three playthroughs is all that it took! “Snake Rattle ‘n’ Roll is a pretty interesting take on the classic “Snake” game we all love and adore. Apart from the isometric view, there is a good amount of decent platforming, various gimmicks to keep each new level fresh and interesting, along with neat enemies, like giant feet that jump around in certain patterns, with the potential of squishing you. The object of the game is to look around for colorful pebbles, / I like to believe that they are actually gumdrops./ consume a certain amount of them and then go to a weight scale, which will open the exit door, if your snake is fed enough. You attack things with your tongue. Holding the attack button extends your tongue and that’s a good fact to have in mind. Certain enemies require constant, rapid attacks, otherwise they heal back if you can’t input enough damage in a given time. We had famiclone controllers with turbo function back in the days. But doing this on the keyboard was quite the nightmare! Some of the lesser enemies in later stages are manageable, but the giant feet are outright really annoying to kill. For one thing, it is actually easier to avoid them, rather than wasting time. Time limit is not that big of a deal in the early stages, but becomes really picky in the last two stages.

So what happened once I got back to the geysers level and managed to play it the proper way? The section of the level that I never managed to play turned out to be pretty tough. Especially near the exit. That one place! Timing geyser jumps along with the strong water currents sure can eat through your lives counter. You have to land perfectly on a one tile square, without overshooting your momentum! I was really happy about what I found in the next level! There was swimming and fish gumdrops! Did I mentioned that the pebbles/gumdrops appear in various forms? Like, with legs, wings, springs and whatnot. It’s a pretty unique feature and it makes the game really interesting! Anyways, the swimming level is pretty easy and it holds lots of power -ups, which you are bound to need, given the nature of the next two levels. The last levels of the game. The no- fun zone. Ice town Canada! Everything is icy and slippery and these levels eat lives like they are NOTHING! I was really frustrated at those levels! I even thought that 1CC run would be impossible, because of how hard those levels felt! But others managed to do it, so why couldn’t I?

Practice makes perfect, but there is once instance that can really ruin it for you! The stair climb of the last level, right before the boss. I can’t even remember how many people and things I cursed because of it. I’m not sorry! I like it when games can ignite your passion via their difficulty scaling. Eventually, I managed to learn how use the right momentum in the icy stages. I learned that jumping a lot and not taking your time with the platforms can be quite punishing. As long as you take it easy and you take notice of where the ice platforms are going to slide you to, even the stairs can be a piece of cake! The final boss battle puts you against an ordinary giant foot enemy, with lots of HP. This battle isn’t as hard as it’s more of an annoyance, really. Learn the foot’s patterns, position near the center and try to follow its trail once it gets past you, while trying to input as much damage as possible, until you lick the foot clean and make it explode. Just the way how I satisfy my clients…

The music in this game is pretty great and memorable. There is also a 2 – player coop., which makes things pretty easier, as long as both players take their time to wait for one another. Defeating the giant feet in 2 – player mode is way, way easier. The final boss itself is a big joke against two snakes!

The game’s difficulty spike goes quite up once you get past half of the game. If you take your time to learn the game though, it’s pretty satisfying being able to beat it. Isn’t that how it is with hard games in general?

Snake Rattle ‘n’ Roll was also ported to the Genesis. Compared to the NES title, there are a few differences between the two. Enhanced and additional graphics. New bonus areas that really, really suck. New and remastered soundtrack. In the flying carpet level, the carpet at the end of the level that disappears every few seconds can be disabled and turned into a normal carpet, if the player kills the giant foot near there. In the geysers level, the last, hard part was changed. Now you can use the geyser at the end to jump strait to the exit door and the giant foot for that area was removed. The controls in the game are much more fluid and momentum is easier to master, especially in the ice levels. Enemies are easier to kill, but giant feet feel like a bit harder to take down now. The lowest layer at the start of the geysers level has been changed too. By change I mean that someone placed that one jumping spike at a really rude place. REALLY RUDE! You either have to get pixel perfect near it to kill it on the one square platform or just sacrifice one HP to bypass it. While the giant feet feel harder to kill, the final boss felt easier to take down, for some reason.

Once you beat the game, there is an extra stage that was not presented in the NES version. While it’s not all that complex in structure, what makes it a bit annoying to complete is the time limit. If you fail to beat it in time, you get sent back all the way to the start of the level! It can get pretty frustrating, especially if you don’t get good pebbles from the dispensers.

For the most part, the Genesis version feels a bit easier, but I really enjoyed the extra content and the few changes here and there. I also beat the high score, which resets you back to zero and beyond. I outta do a video of this at some point… 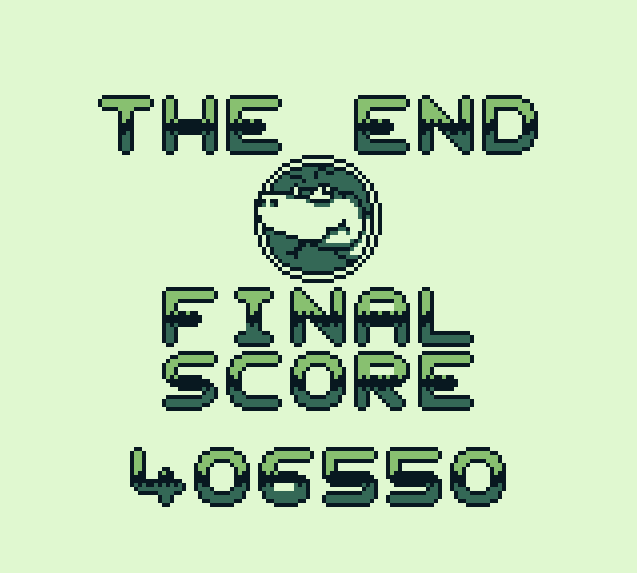 Did you know? There is a sequel to “Snake Rattle ‘n’ Roll”! It’s for the Game Boy under the title “Sneaky Snakes”! This one however drops the isometric view and it’s just a side scrolling platformer. The main theme of the game is still intact and it works surprisingly well with this perspective. Old pebble types make a comeback and there are new ones. I really enjoyed the bee/ wasp ones! They just latch on to you and take you all over the level! The levels are pretty fun and the game is not all that hard, even towards the end. There are many new gimmicks to keep your attention, like the balloon sections that I really, really hated. There are also instant dead spikes at some point, which I bypass pretty easily, without even feeling bothered about their nature. There is also that one section where you push a ball and use it as a platform. It’s actually way easier than it looks at first. You just have to TAKE IT EASY! SNAKES ARE ALL ABOUT TAKING IT EASY!

Most people just cannot cooperate with their primal, animal instincts when it comes to video games. That’s why there are rich people on the internet.

That’s why I’m writing a post about video game snakes.

“Sneaky Snakes” features lots of fun and unfair bonus areas, which you are bound to fail in your first try, simply due to the lack of knowledge regarding which thing takes you to the exit. I remember there were things that you collect, but you can’t tell apart one another and hidden in one of them was the exit. I played these snake games more than six months ago…

The last boss in this game is outright weird and for some reason takes quite some time to put down. As a boss, its better than the foot for sure!

You get to save a lady snek. Cool game!

“Sneaky Snakes” is a decent platformer. Would suggest to all my friends and lovers!